I was up late last night. I was in fact up past dawn. The thing is though, dawn here was at 3:47am today, so it's not that hard. Here is what last night looked like:

Crazy! And kinda cool. It's bad for sleeping when the birds start chirping at 2:30 in the morning though...
Posted by Katie's Great Adventure at 6:40 AM 1 comment:

I just realized I never wrapped up the chocolate-almond croissant challenge from France! I kept up with my challenge until the end, dutifully trying every chocolate-almond croissant I came across. Yes, ti was tough, but I persevered. I think that there are many more croissants still to be discovered in my future, and I must admit I did not find one that made me decide the quest was over. My favorite was from the Vieux Four de St. Anne. It was subtle, with a good balance of flavors and the right textures for each component. But I just read on another blog from Montpellier that the bakery closed! NOOOOoooooooo. I guess I have to start over :)

The problem is that croissants are just not found in Sweden. They are, however, big on cinnamon rolls, which I also love (no, I don't love all pastries, but each country seems to have managed something I can fully support). I had been told repeatedly before I came how awesome the cinnamon rolls are, yet once I got here, I must admit I was a bit disappointed! Places where I liked other things had cinnamon rolls that felt a bit dry to me. My image of cinnamon rolls may be skewed due to exposure at critical developmental periods to things like Cinnabon-type gooey monster cinnamon rolls and the Pillsbury ones that made Christmas morning even better. But I decided that there was no better way to know Swedish cinnamon rolls than to try a range of them. And thus was born the Cinnamon Roll Challenge. I vow to commit myself fully again to an exploration of my host country through pastry!

Our first entry (not my actual first cinnamon roll experience, just the first one I got pictures of, oops): 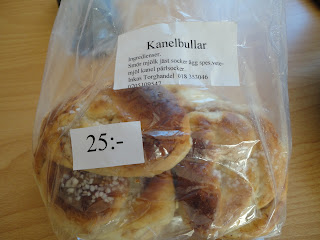 Kanelbullar is cinnamon roll in Swedish: kanel=cinnamon and bullar is for buns according to google translate. But these beauties came from an old lady selling them on a stand in the street on a beautiful day last weekend. I was stoked, thinking that they might end the challenge before it began, but sadly, that was not the case. I think they suffered from being put in a plastic bag, and were sorta gooey in a bad way, more like soggy. I took one out and left it on a plate to dry off a bit (get rid of bag condensation basically), but then it was just dry. I also tried heating one a bit, but no real luck there either. I'm not sure what they would have been like without bag effects, or even if the bag affected them actually. But either way, I was sad that a little old lady couldn't provide me cinnamon roll bliss. This may be better though--I haven't seen here again, so what if I had found the perfect one and never got to have it again?? I'm hoping to find my winner in a bakery where I can go regularly.... I am back to biking everywhere (here, like Groningen, is very bike centered and bike friendly) so I'm getting lots of exercise and can eat cinnamon rolls at will.  Haha yeah, we'll see how long that idea lasts!

And here's another shot I love from that day in town, just for fun and because it makes me happy! 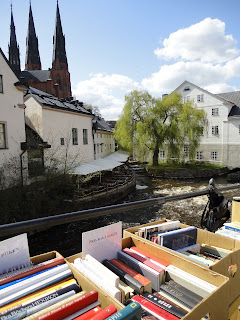 Posted by Katie's Great Adventure at 8:22 AM No comments:

Things that come in tubes 5

Today's item: vitamins. I forgot to take a picture in the store, but imagine rows and rows of these, like "Everything Cheese" from last time. This one is maybe cheating a bit, since I've seen vitamins in tubes like this before (in France I think), but here the tube madness was again taken to extremes, with tons of them! 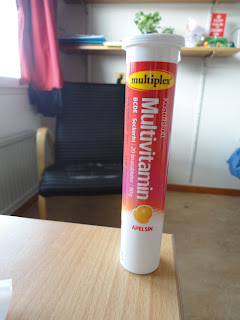