Things that come in tubes 4

This one is "Everything Cheese." Ost, the last part of the name of each of these, means cheese. A sample of the flavors of cheese in a tube are bell pepper, crayfish, ham, and chorizo. Two of the ones I'm having trouble translating (or maybe more believing) are mayonnaise cheese and game meat cheese. So that's delicious. Haven't worked up the guts to even buy one of these to try. That enormous tube of caviar I got just isn't going anywhere fast, and I think one tube of Swedish mystery in my fridge at once should be some sort of limit. 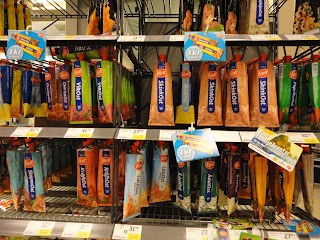 Posted by Katie's Great Adventure at 6:15 AM No comments:

So here in Europe I've had a lot of Best [insert country] [insert event]s. Remember the Best German Birthday ever? Time for another one of those, only this is a double: Best Swedish Orthodox Easter Cabin Weekend ever! Orthodox and non-orthodox Easter were a week apart this year (something about how they count the days since Christmas), and it turns out that the only people in my program here right now that do much for Easter were the four Orthodox people (from Greece, Cyprus, Serbia, and Ukraine). They decided to have a big Easter meal where they would each cook stuff they always eat for Easter, and the rest of us happily volunteered to help in exchange for eating! To make it better, some people who had already been here for a semester knew about a cabin we could rent from the Student Union, so we decided to have Orthodox Easter in the cabin. We thought it would be a nice way to welcome spring by getting out of town. We were a bit optimistic on that front, but I'll come to that.

To prepare, we first had to make Easter eggs, since we needed so many (15 of us went). This meant I got to learn their awesome way to make beautiful eggs. First, you need a bunch of leaves. No, I'm serious. You get brown eggs, put leaves on them, put them in pantyhose to keep the leaves in place,  dye them a beautiful deep red, and peel the leaves off to reveal the leaf pattern on the egg! We did it with a packaged dye, but my friend says you can also make the dye from onion skins, so I want to learn how to do that so I can do it at home. I think these eggs are amazing--I'm adding them to my international cool tradition collection. 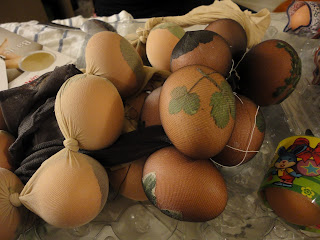 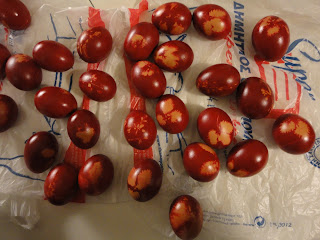 So with those ready, we bought an unbelievable amount of food, rented a car, and got all ready for our spring weekend at the cabin.

We woke up Saturday morning to leave and it was snowing sideways, with several inches already on the ground. Jumped the gun on the spring part! Oh well! We headed out to the cabin, and it was beautiful. There were several cabins in the woods near a lake about 45 minutes from town. And a sauna (coming back to that). 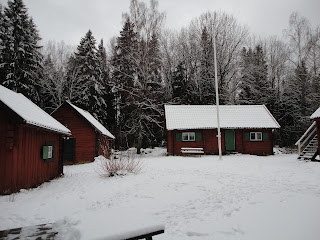 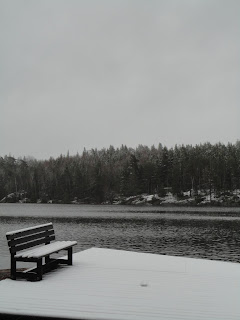 Since cooking for 15 people takes a while in the best of circumstances and we were in a cabin with four burners and a campfire to cook everything, we got started right away and spent a lot of Saturday getting everything ready. It was fun chopping, running around, tripping over people chaos, but well worth it. We had 10 kilograms of lamb and who knows how much veggie material. There were tons of salads, meat cooked several ways, all kinds of stuff. Amazing. It felt like Thanksgiving, with all of us squeezed around a small table struggling to even try everything before being too full to move. So good... Most of us successfully avoided the food-induced nap in order to wander around the woods, check out the lake, and just hang out.

And then it was sauna time. Sauna is a sacred tradition here. Many apartment buildings have their own, and even the building where I work has one! I was never overwhelmed by the thought of sitting in a hot, humid room. Kind of sounds like a Georgia summer... but I had decided I had to at least try it. So off we went to the cute little sauna by the lake. Sitting in the sauna was kind of like I thought--hot and sweaty. But then one of the guys said "Ok, time to jump in the lake!" I knew that you usually do something really cold after sitting in the sauna, but jump in a freezing lake?? I wanted to have the true sauna experience though, and when in Sweden... so off we went, running barefoot through the snow, in bathing suits, in the dark, to jump off the dock in the picture above! Insane, I know. The lake was cold, but not actually as bad as expected. I didn't hang around in the water, just jumped in, did something approximating levitation to get back out, and ran barefoot back through the snow to the sauna. I liked the sauna better after the lake, I must admit. We hung out in the sauna for a while longer, jumped in the lake again, then went inside and played poker with pasta (as chips) and talked for the rest of the night. Then my friend and I stayed in the top of the cute small cabin below.

The next day, we ate leftovers for breakfast and then had egg fights! That's right, the beautiful eggs are used for a game. Everyone gets an egg, says something about Christ rising and  then you whack the eggs together, round end to round end, pointy to pointy. If your egg cracks, you're out. Everyone in the room does it until only one person in the room has an egg with at least one uncracked end, and they win. It's fun! Apparently in Orthodox households with one child, the kid usually gets a wooden egg to ensure they win! I like that. After eggs fights, we went to another, larger dock nearby and laid in the beautiful sun for a while and just relaxed (the snow had melted by then) then headed home. It was a great weekend. My best Swedish Orthodox Easter Weekend ever, in fact!
Posted by Katie's Great Adventure at 10:01 AM 1 comment:

Meanwhile, in Sweden, it's still snowing...


This is from April 1st. It has also snowed four of the six days since then and hailed a few times for good measure. I find this hard to believe. It was a lot warmer a few weeks ago, but now we're back to temperatures just a few degrees above freezing during the day and several below at night. It's not actually too bad though--because temperatures are above freezing during the day, the snow melts quickly and a few things are even starting to try to bloom/get leaves, so spring is in sight, but I am so amused that we are back to getting regular snow. I am glad I was in Sweden for only a spring semester and that it was an easy winter. This is rather late for there to be snow and for it to be this cold, but the main part of winter was incredibly mild. If I had been here during a real winter... We won't think about that.
Posted by Katie's Great Adventure at 1:23 PM No comments:

There is now a third keyboard in my life and my typing is even more of a disaster! The Swedish keyboard is not as different as the French AZERTY one--there are no letter rearrangements, just the addition of the special letters Å/å, Ä/ä, and Ö/ö. The problem this time is that a lot of the special characters are moved. I'm back to occasionally staring at the keyboard for a few seconds to locate things I need! People probably think I'm nuts. I also am constantly typing ä or ö instead of apostrophes, so just ignore that in any emails or chats we might have...


Posted by Katie's Great Adventure at 4:00 PM No comments: